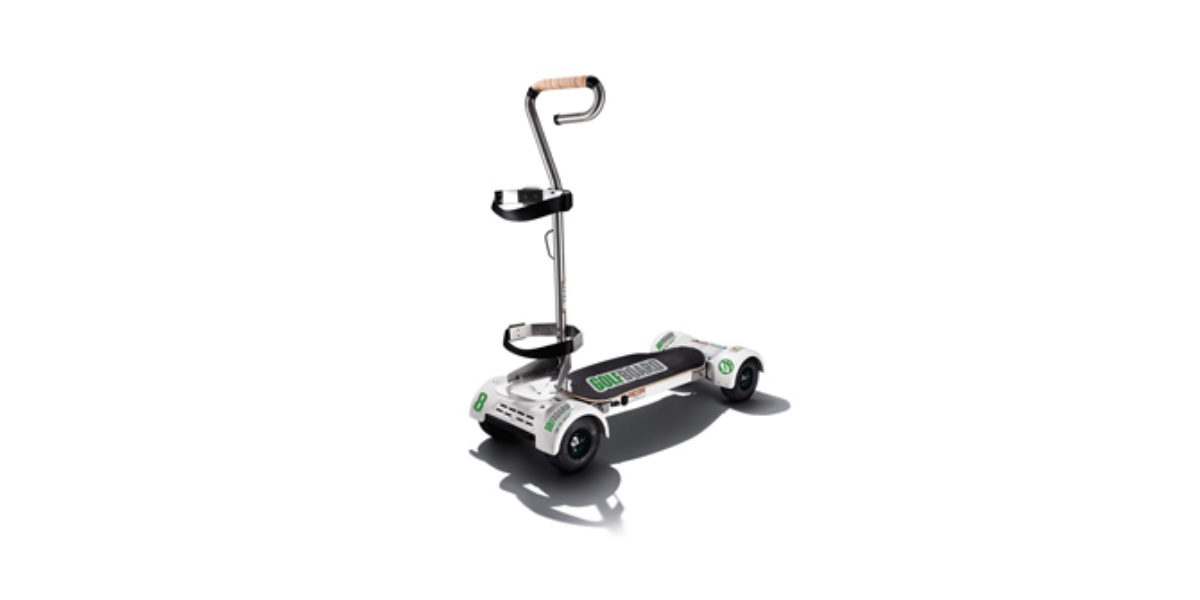 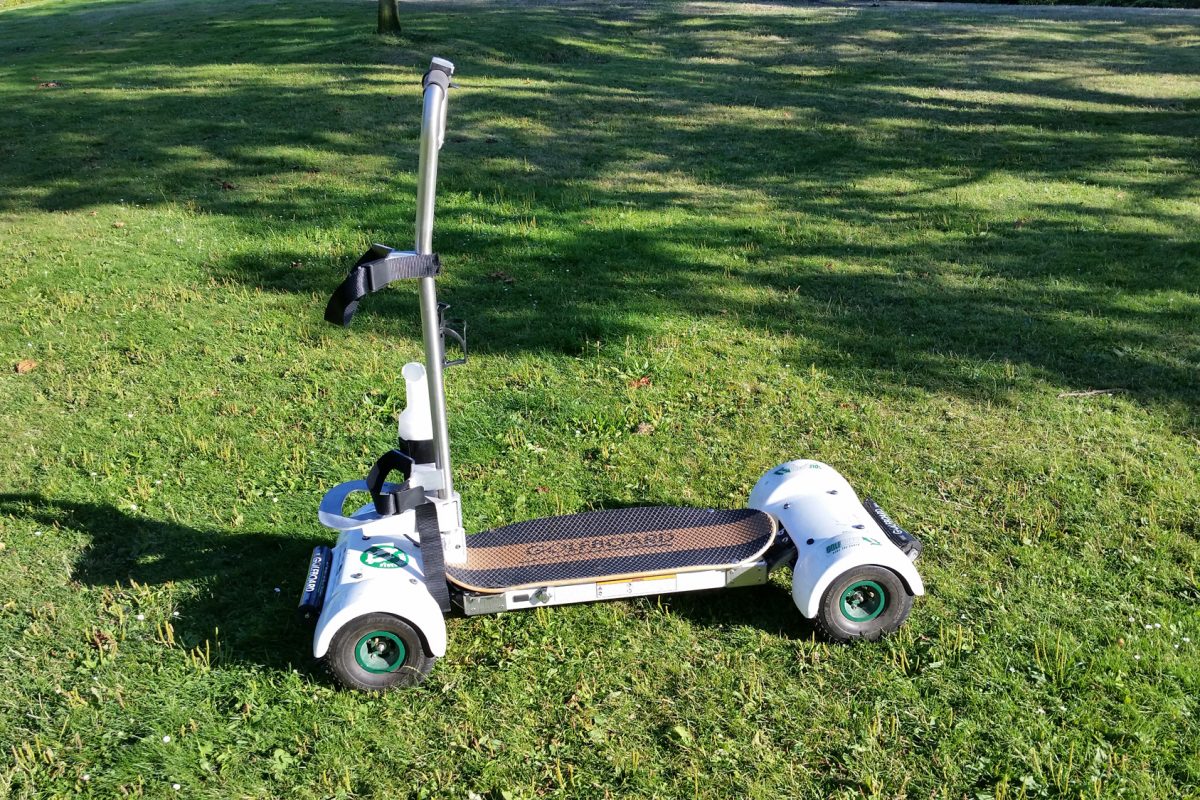 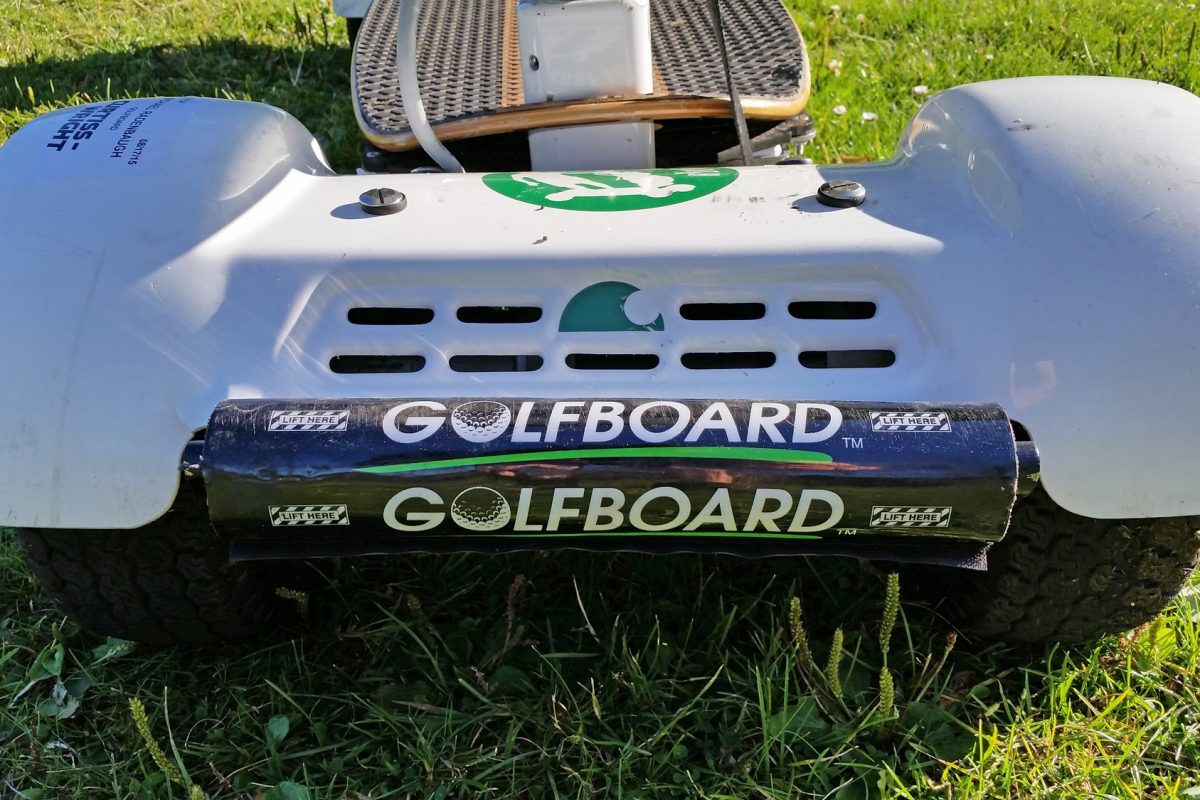 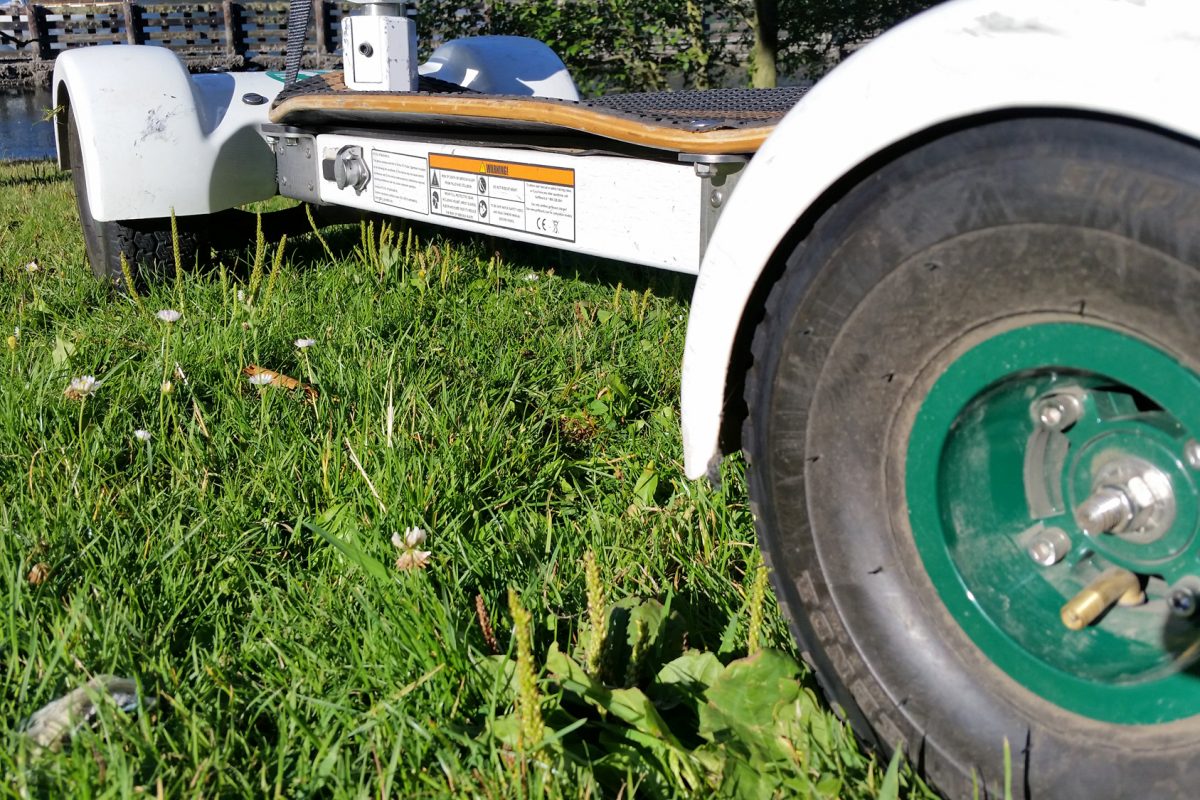 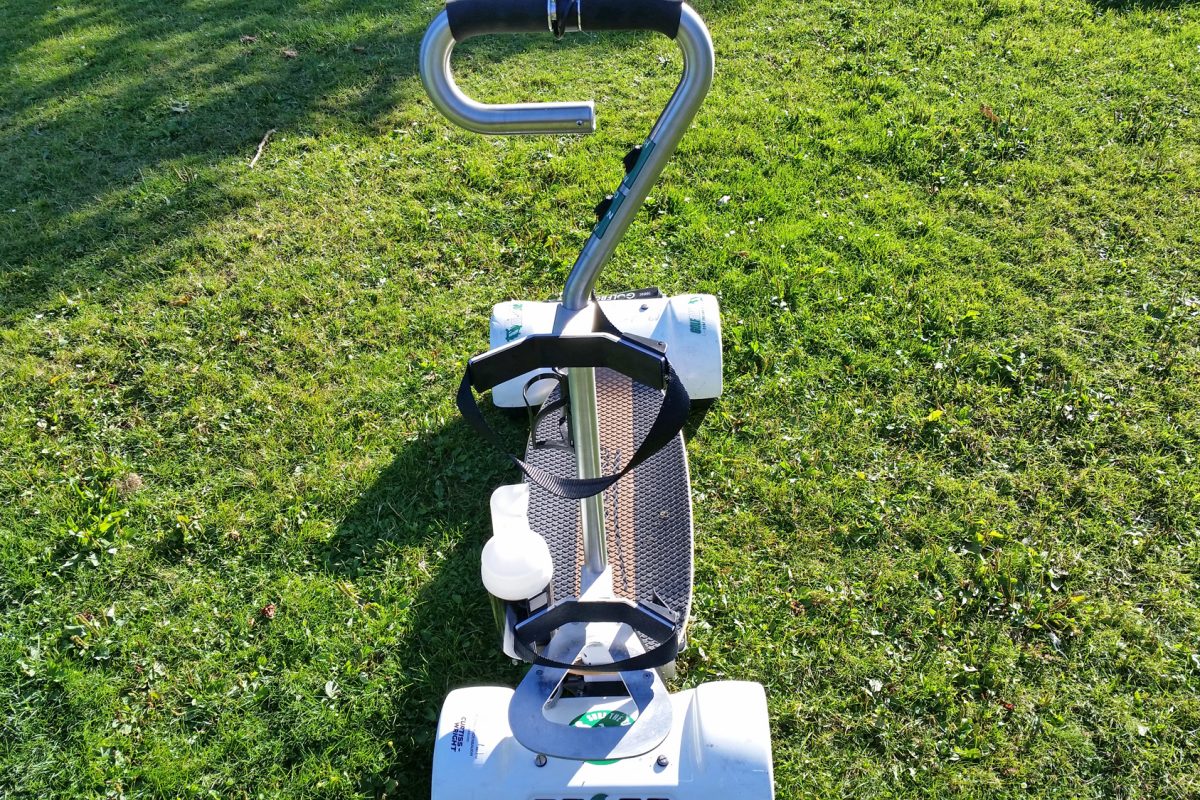 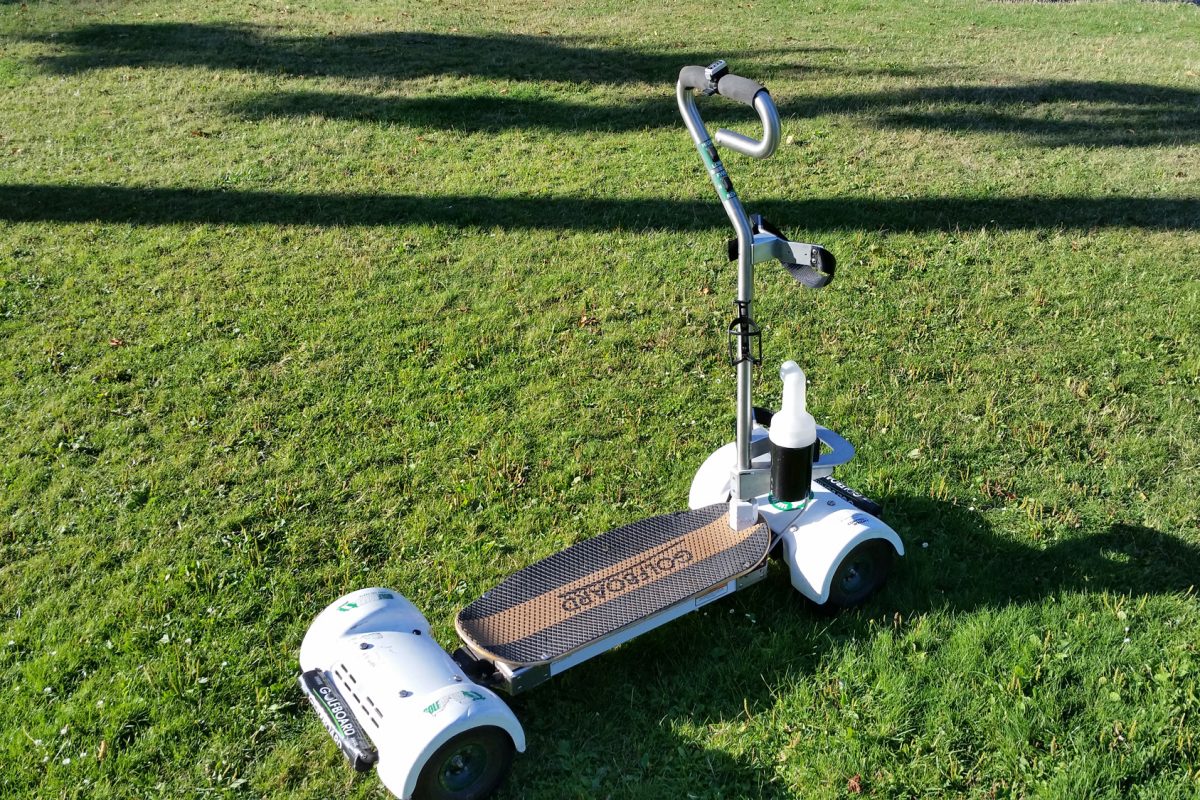 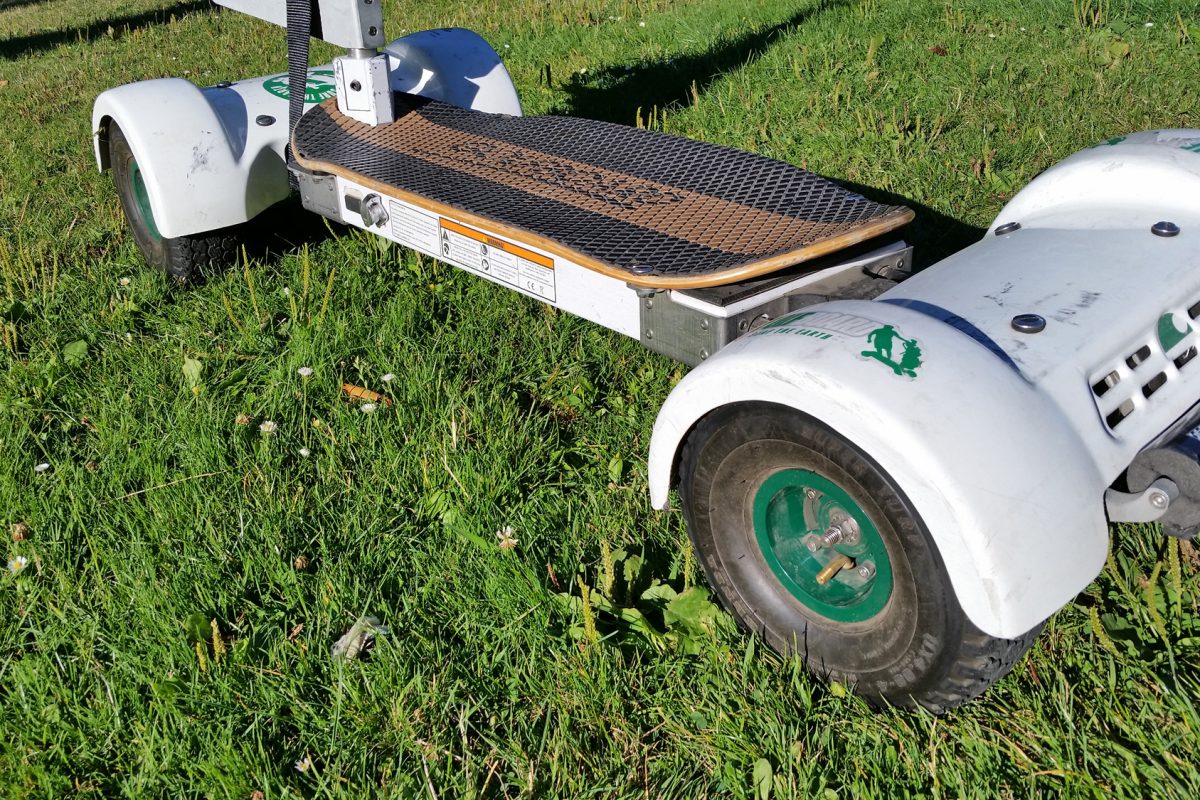 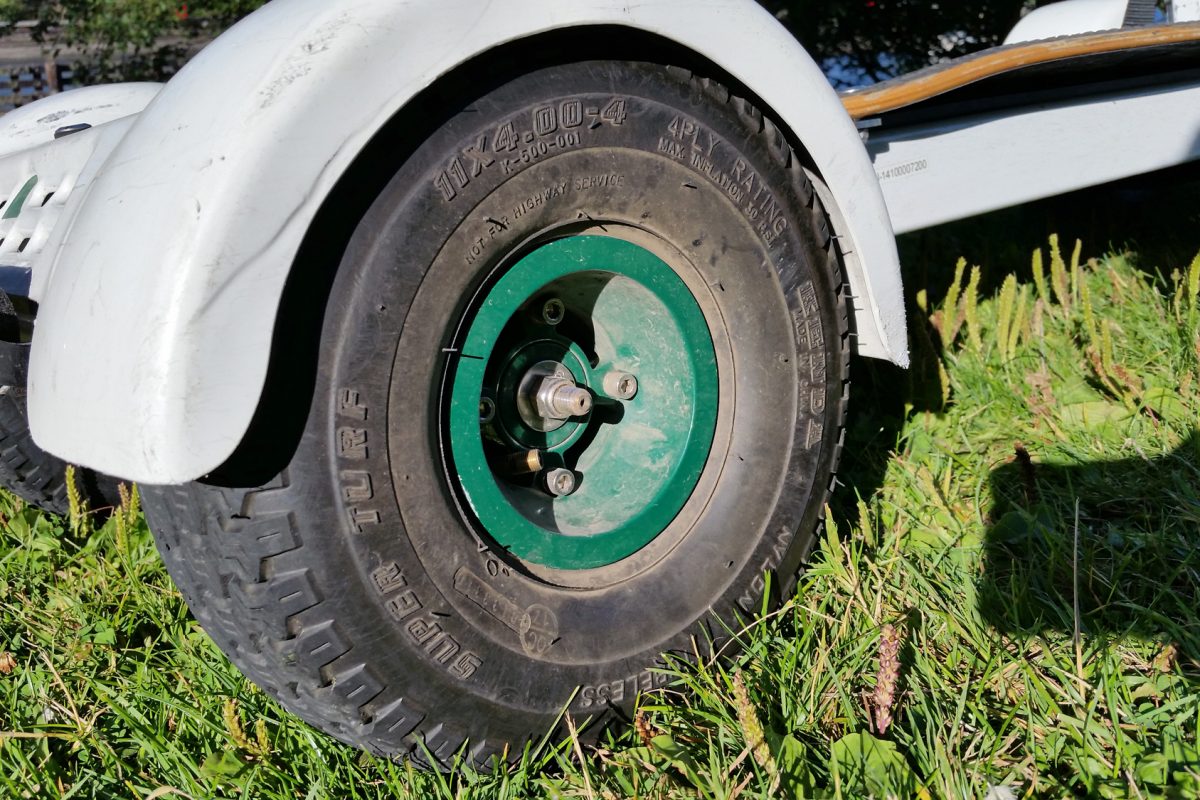 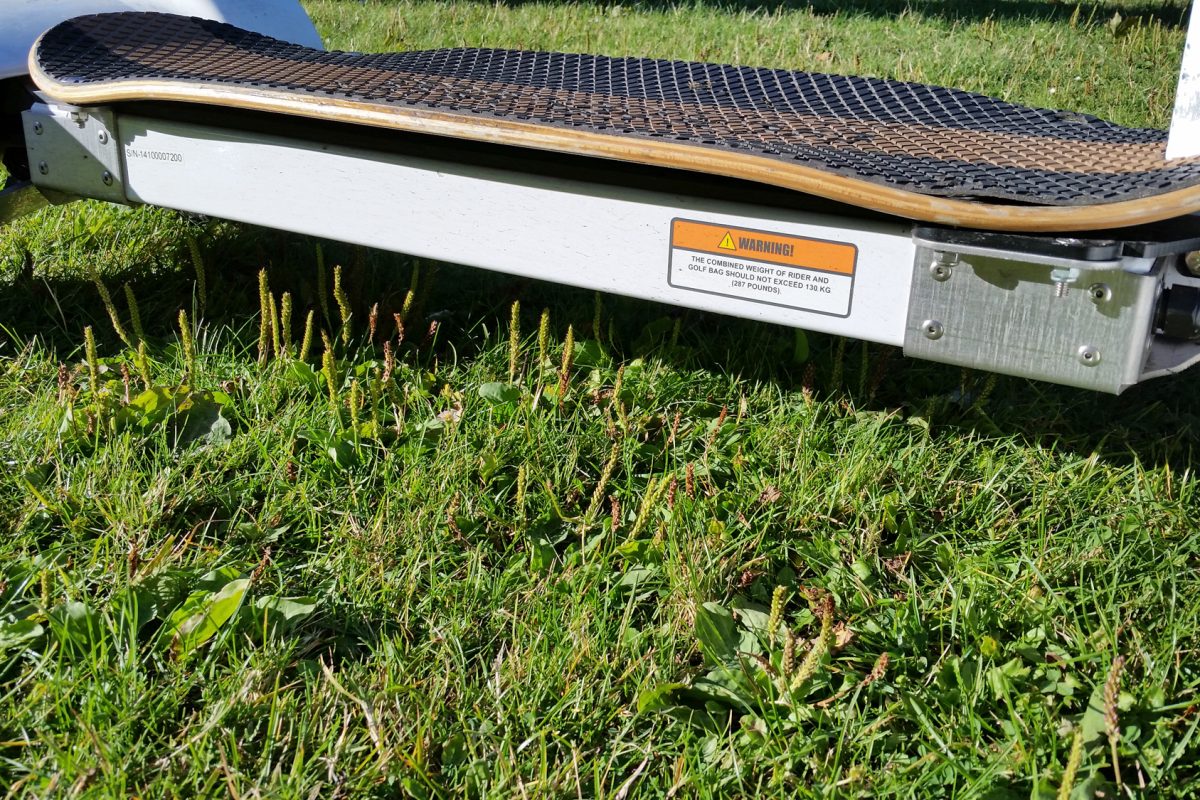 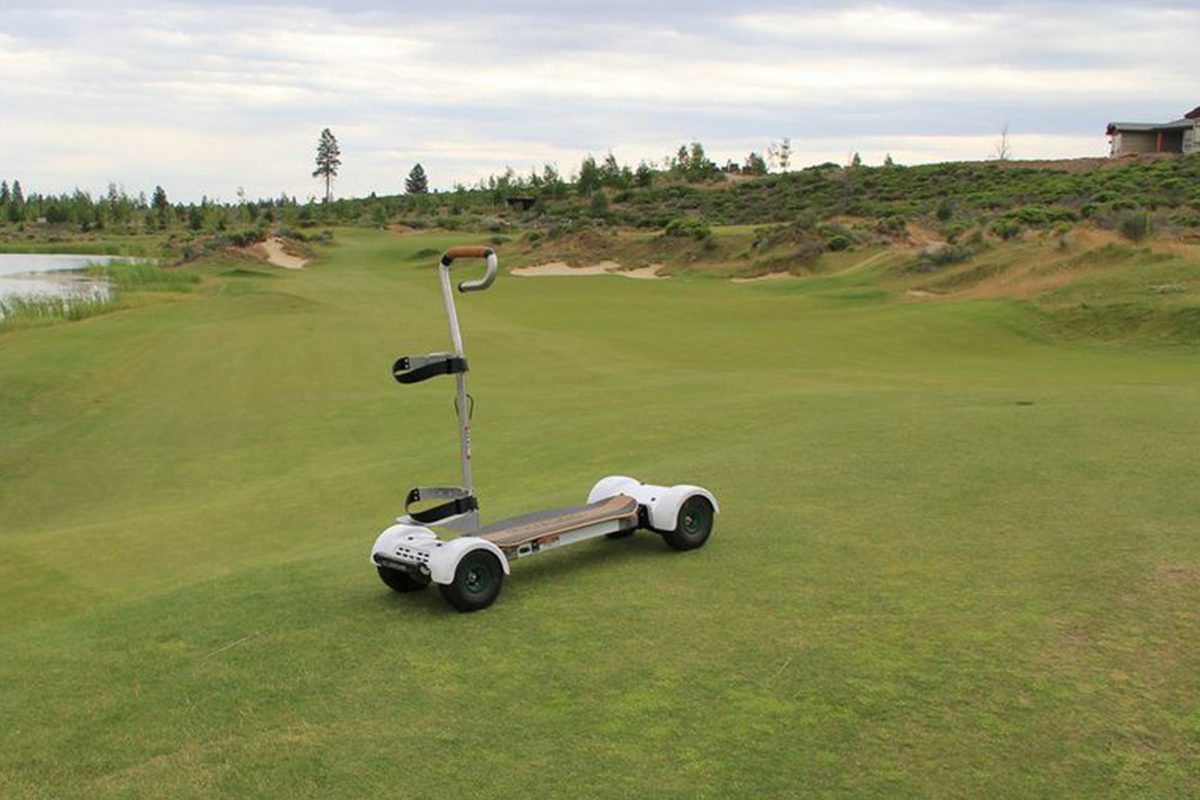 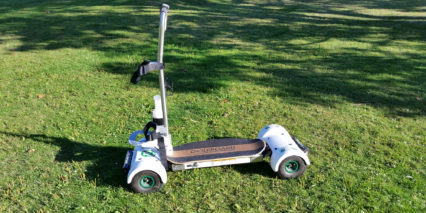 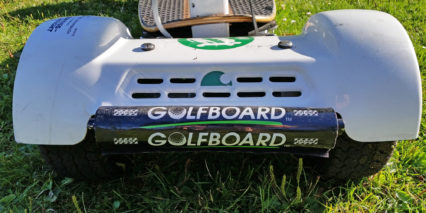 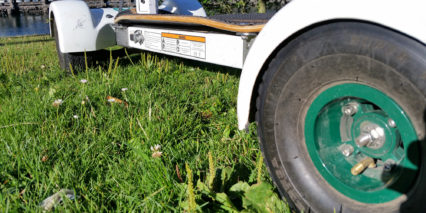 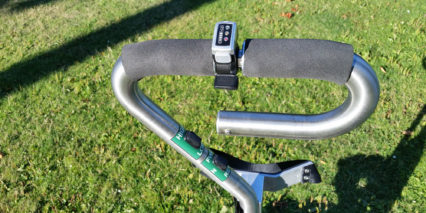 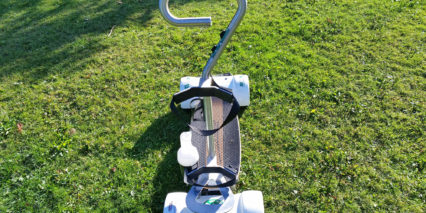 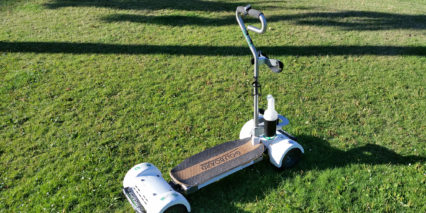 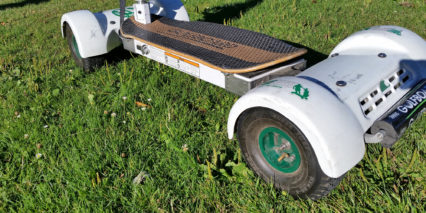 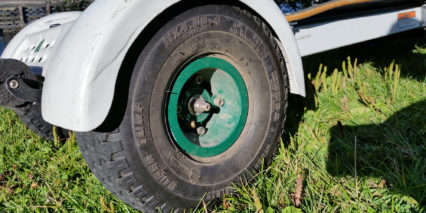 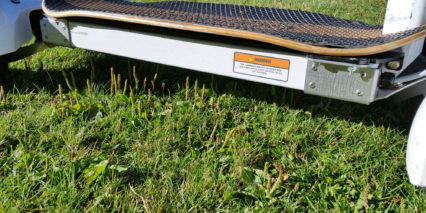 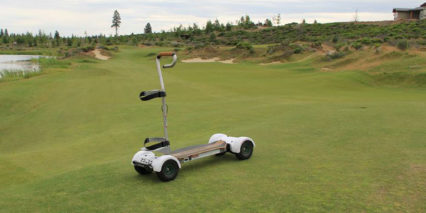 The GolfBoard is a single-passenger electric golf cart designed to be ridden standing up… much like a skateboard, surf board or snowboard. Maybe it’s more like a wakeboard or kiteboard because you have a big sturdy handle to hang onto? In any case, it offers riders a more thrilling way to explore the hilly, lush terrain of a golf course while getting a full body workout and a dose of adrenaline. As a young person, I golfed for fun in high school. Growing up in something of a retirement community, Loveland Colorado, we had four courses within five miles of my house! I loved regular golf carts because they let me drive before I turned 16… they were thrilling and novel in that sense. Still, I never really considered the damage being caused by the hard braking and repeat path use by me and other golfers. In recent years it sounds like golfing has declined in some regions of the US as recreational tastes have evolved. The GolfBoard does a lot to address these seemingly disparate challenges to the game by attracting a younger audience, appealing to an aging generation of board sports enthusiasts (like me!) and reducing wear on courses. Honestly, it’s a pretty amazing idea… The GolfBoard gave me the same feeling of excitement and adventure that I experienced as a young person, but it doesn’t come cheap. One GolfBoard CourseBoard unit (the low-speed model that matches traditional carts at 5 mph to 10 mph respectively) is $6,500 so it sounds like many courses are leasing them. I have no idea how liability works on these things and could imagine some riders taking it a bit too far… but that probably also happens with traditional carts right? There are two bumper bars built in and they include replaceable foam pads designed to reduce damage to other carts, shins and plants. As a quick aside, one of my former high-ranking coworkers got super drunk at a course once and tipped a golf cart over with his buddy onboard, so at least with a GolfBoard there’s only one passenger risking their life, and the office will still have a blast recounting the incident ;)

Driving this amazing chariot of golfing goodness is a 4,500 watt motor system turning both front and rear solid axles for powerful all-wheel-drive performance. Nominal output is closer to 1,000 watts but that’s still very impressive, and more quiet and efficient at low speeds. As we continue this review I’m going to draw some comparisons to electric bicycles because this is a technology that’s proliferating in the US and something you might have tried or seen first hand. So most electric bicycles range from 250 to 500 watts nominal output with a single wheel and they weigh about half as much. All of that extra power on the GolfBoard is important because it weighs ~115 lbs on its own and is capable of moving up to 285 lbs (Golfer, Clubs, Water, Sand/Seed Bottle etc.) Amazingly, even with all of this weight the GolfBoard can scale 30 degree grades. I actually saw it do this first hand in damp grass on a hillside in Seattle and I could hardly believe my eyes. The tires here were specially chosen to be wide and grippy but also sort of flat and easy on grass. As with the non-locking regenerative braking design, the wheels and tires are said to produce ~30% less damage to grass according to the official website. Neat :) So you’ve really got a lot of power and strength here to work with and the variable speed throttle is quick to learn and easy to use… it’s not overly distracting or complex, you just press down and the board takes off smoothly. The best part is, it’s very quiet and doesn’t produce smoke or toxic fumes like internal combustion powered carts… it’s also more reliable because there are fewer moving parts and a more basic maintenance schedule.

Powering the GolfBoard is an enormous Lithium-ion battery pack offering 48 volts of power and 29 amp hours of capacity… again, nearly triple what I see on standard electric bicycles. It’s designed to last an entire 18 hole round with room to spare, even in high-speed mode you can get 25+ miles per charge. The battery contributes a lot to the overall weight of the GolfBoard but it’s positioned low and spread across the underside of the deck which creates stability. You can really lean this thing hard without feeling like it’s going to tip and that’s important if you like to imbibe while playing. As the battery does begin to drain you’ll see the LED indicator change from green to yellow and then red and that’s when you’ll want to plug it in. The included quick charger offers 10 Amp output (nearly five times as fast as a standard ebike charger). If you own or manage a golf course, you could expect to turn a drained cart out in under one hour… The lower half of batteries always charges faster because cells aren’t being balanced and with the GolfBoard that could be 15+ miles of capacity ready to go. While we’re on the topic of batteries here, I recommend storing these things in a cool, dry environment. I don’t think the pack is removable so you might want to take the entire cart indoors or put it in a shed if it’s super cold or hot outside. I’m not sure on the warranty and leasing terms from GolfBoard but my guess is that the cells and components used here are industrial grade and meant to last. The frame feels solid and there does seem to be some insulation around the decking area.

Operating the GolfBoard is extremely easy and intuitive… after it’s charged and unlocked! As with any good fleet vehicle, the GolfBoard has a keyed lock to keep it from wandering off the course after hours. The cool part is, there’s an electromagnetic braking system that activates when the cart is locked so you can’t push or pull it. For an end user, there’s only a gray on/off power button near the LED display and trigger throttle along with a low/high speed switch and forward/reverse switch. I found myself riding at low speed and still really enjoying the feeling of “surfing” the terrain. It’s almost more fun than golfing! Just exploring the hills, trees and tight areas of the course which were formerly only walkable. Turning can be a little difficult if you’re a lightweight like myself but the suspension is adjustable and with a bag and clubs fastened to the front rack I’m sure it would become easier. Definitely bring your socks to keep clubs from rattling (just like a regular cart). I guess the biggest thing for me while riding and operating the GolfBoard was how quickly and powerfully it decelerates if you let go of the throttle. With this thing you’re either going or stopping, it doesn’t really coast because there aren’t brakes built in… just regeneration. Maybe in the future they could introduce a larger paddle or some other intuitive lever that doesn’t require as much finesse to actuate.

Development for the GolfBoard began around 2010 with some experimental off-road skateboard projects. The guys who created it enjoyed golfing as a game but also saw the courses with fresh eyes. The hilly, dynamic landscape was a veritable playground for riding… if only they had the right vehicle, and were allowed to use it there. I myself enjoyed sledding on golf courses while growing up, as I got older we would create jumps and push each other down the hills for more speed. The GolfBoard honors courses everywhere by enabling patrons to more fully experience the terrain while simultaneously reducing their impact on it. I’ve bought into the marketing materials that proclaim it can revitalize courses that have seen a drop off in use. How can you see someone riding one of these and not want to try it out yourself? If you’re a seasoned board rider or just someone who likes to go fast then check out the GolfBoard SportBoard which goes 7 mph and 14 mph (vs. 5 and 10) and is available in black as well as white… And definitely wear a hat out there or apply some sunscreen because there’s no canopy protecting you from those UV rays ;) 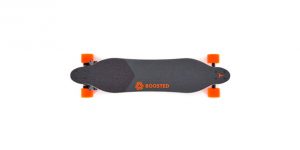 This info is the cat’s pamjaas!

This is awesome. Where can I buy one in Australia?