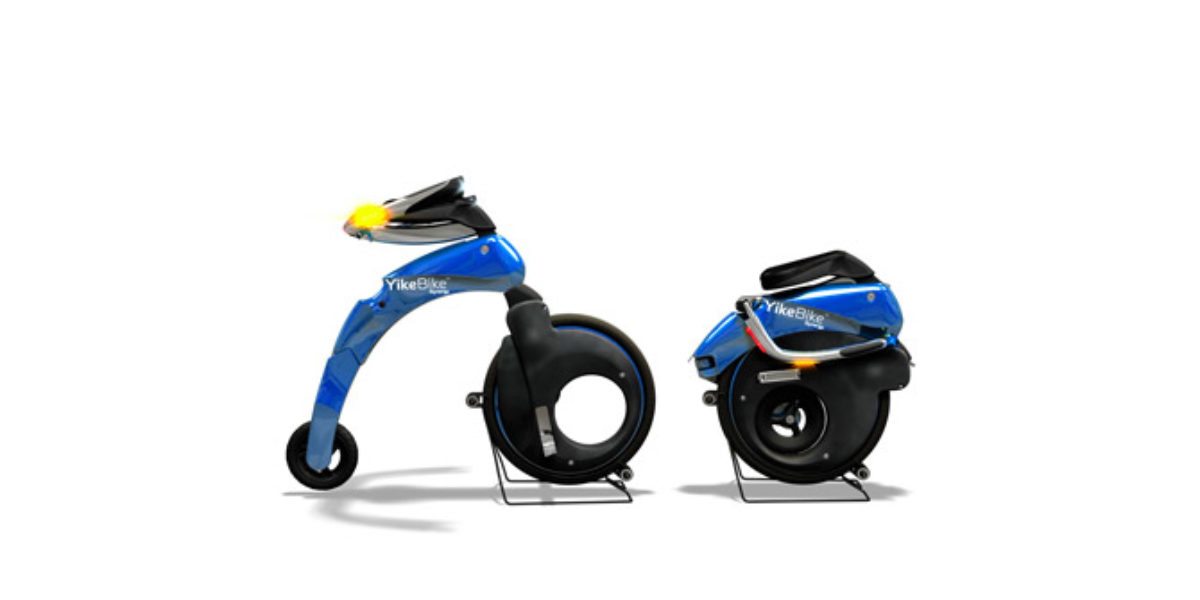 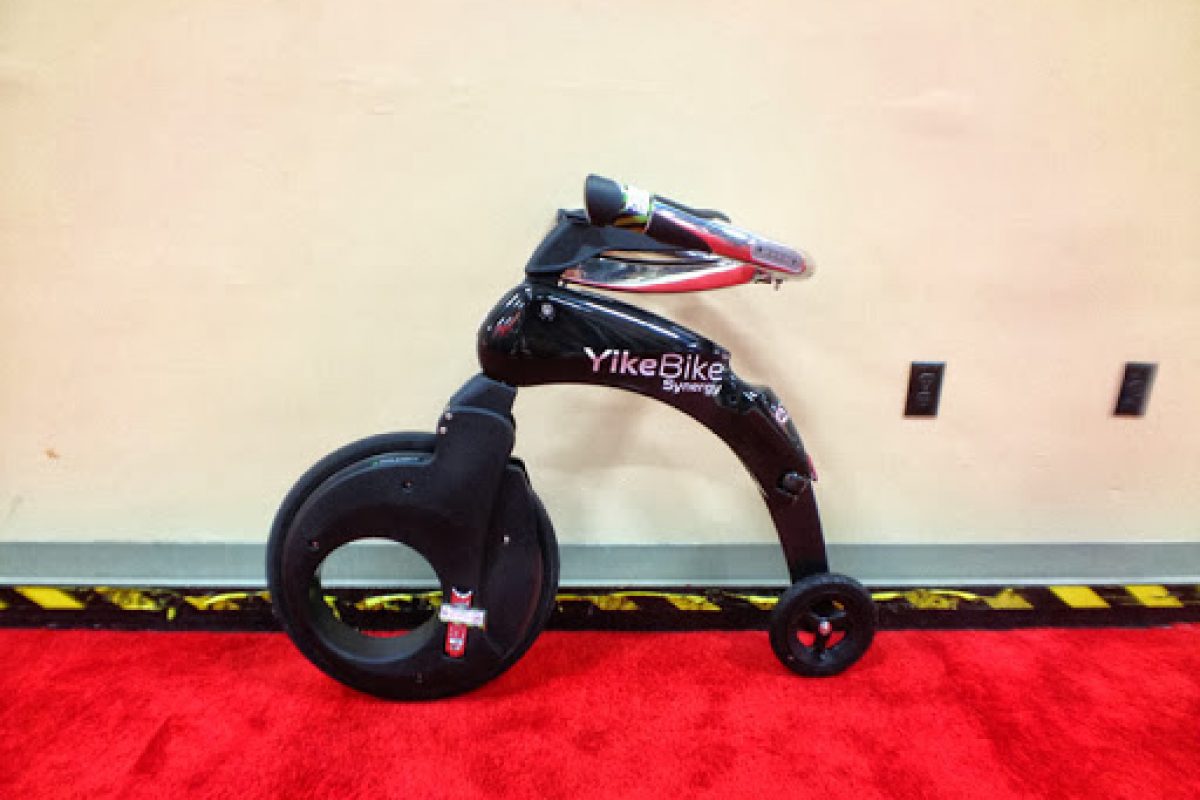 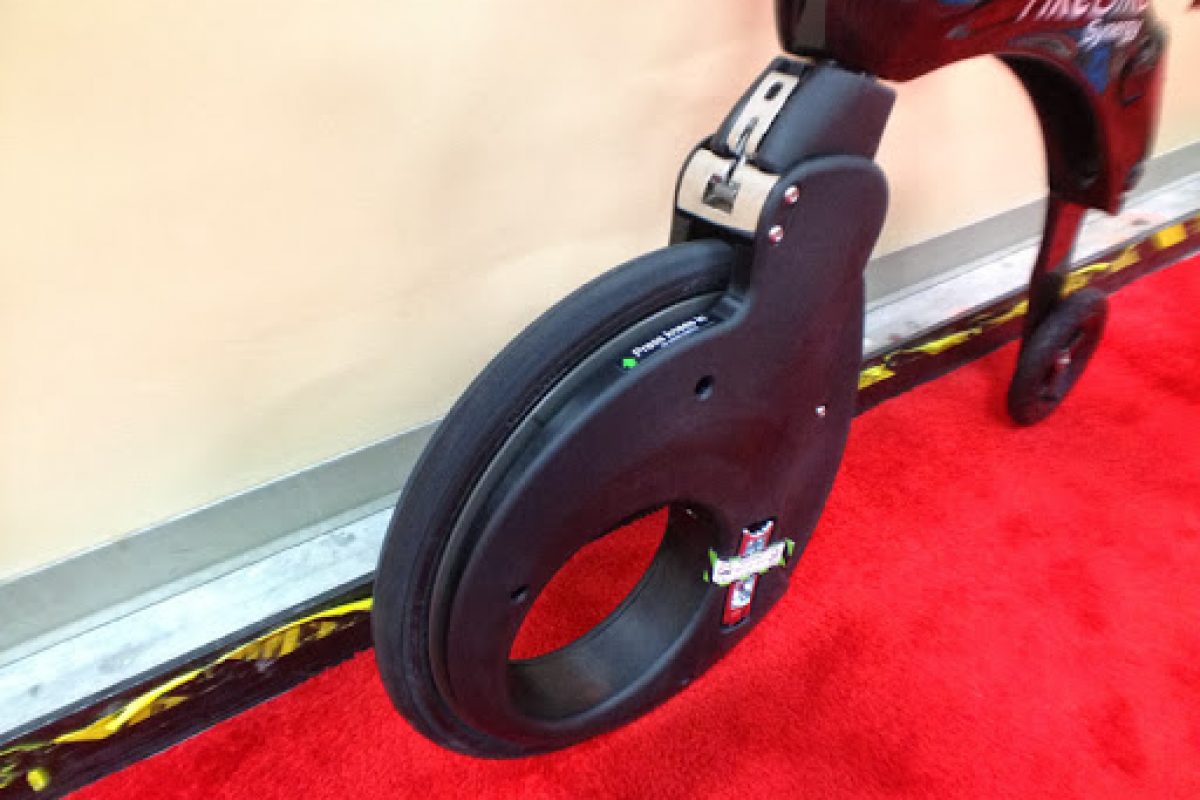 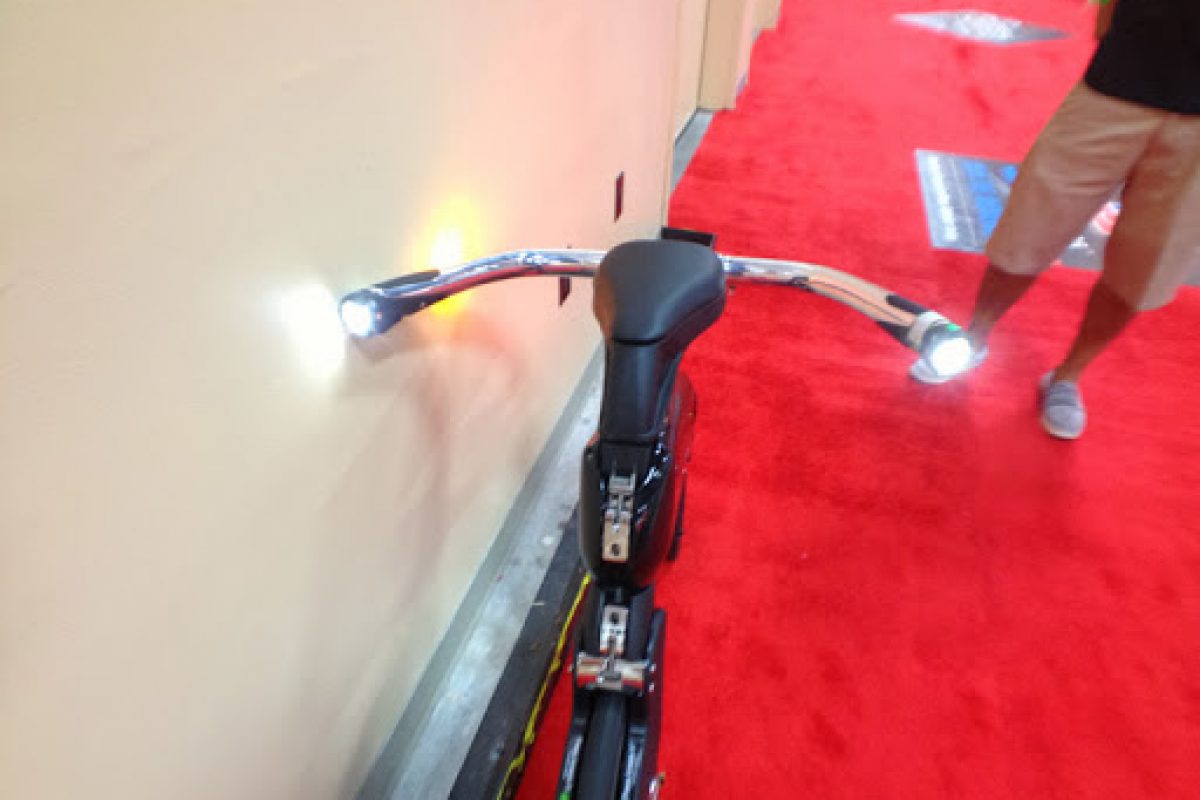 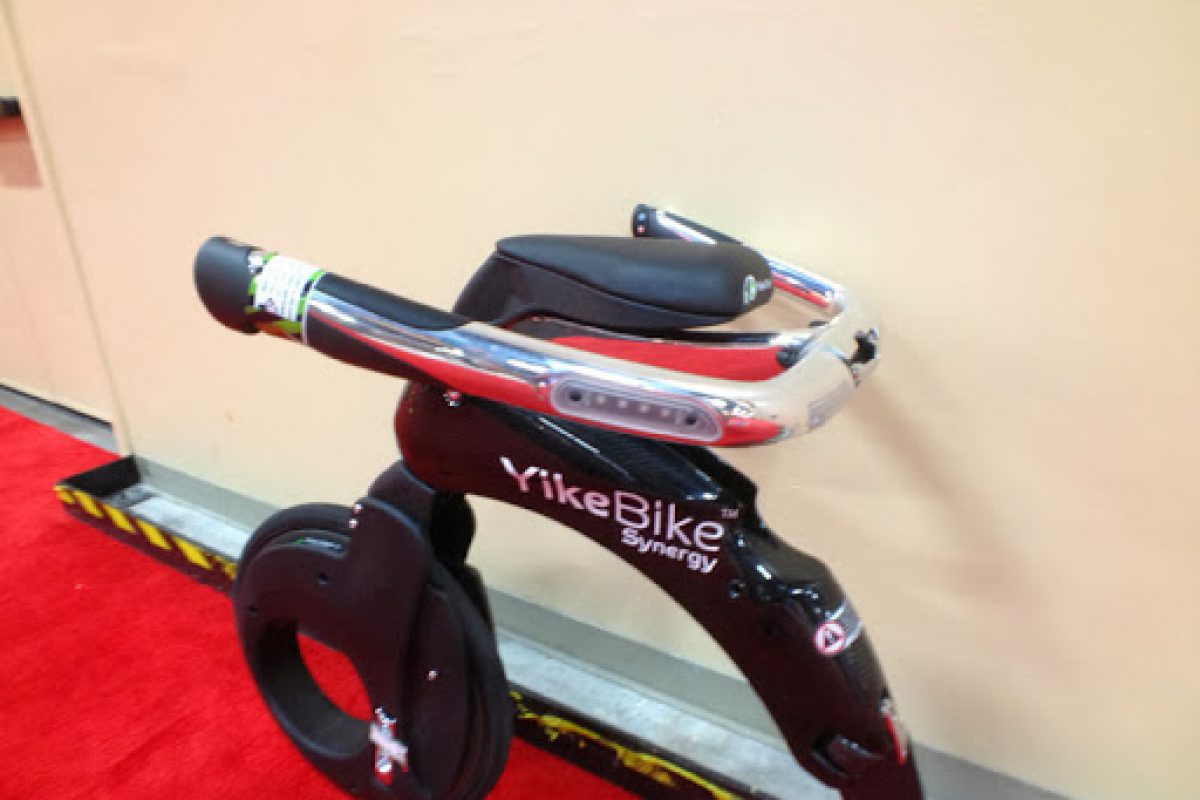 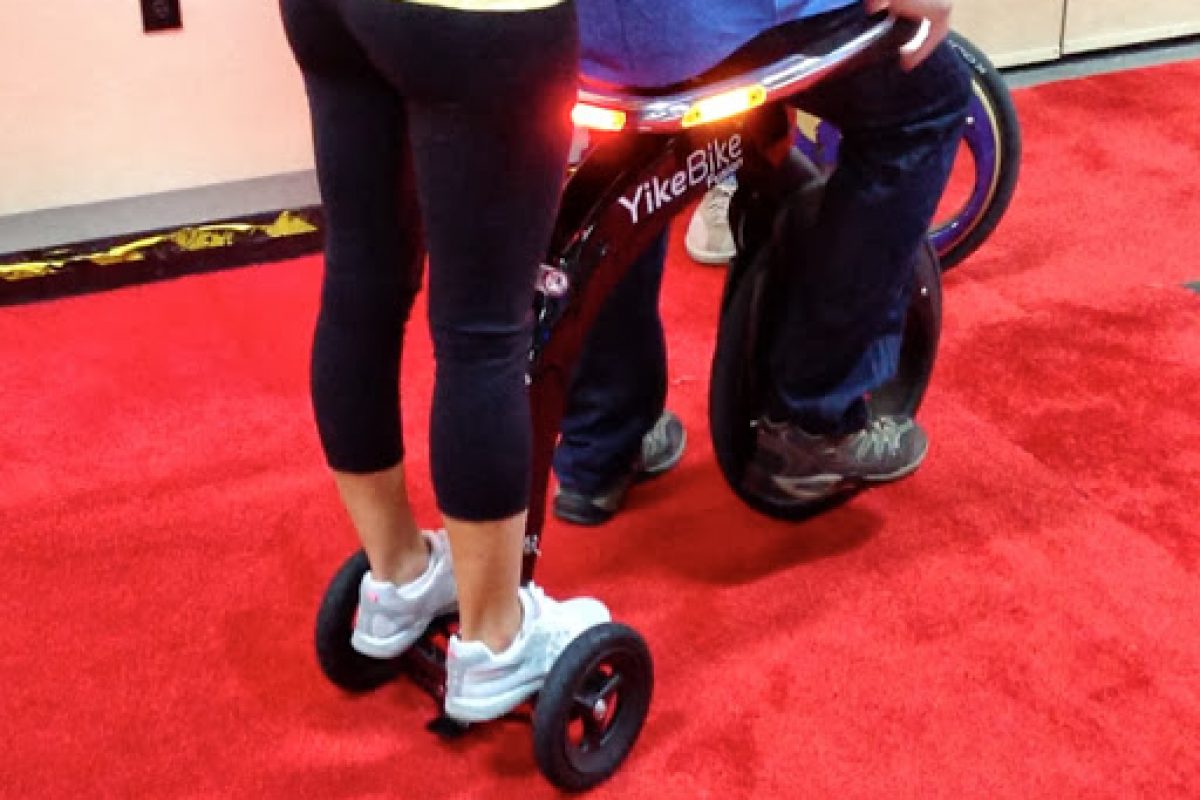 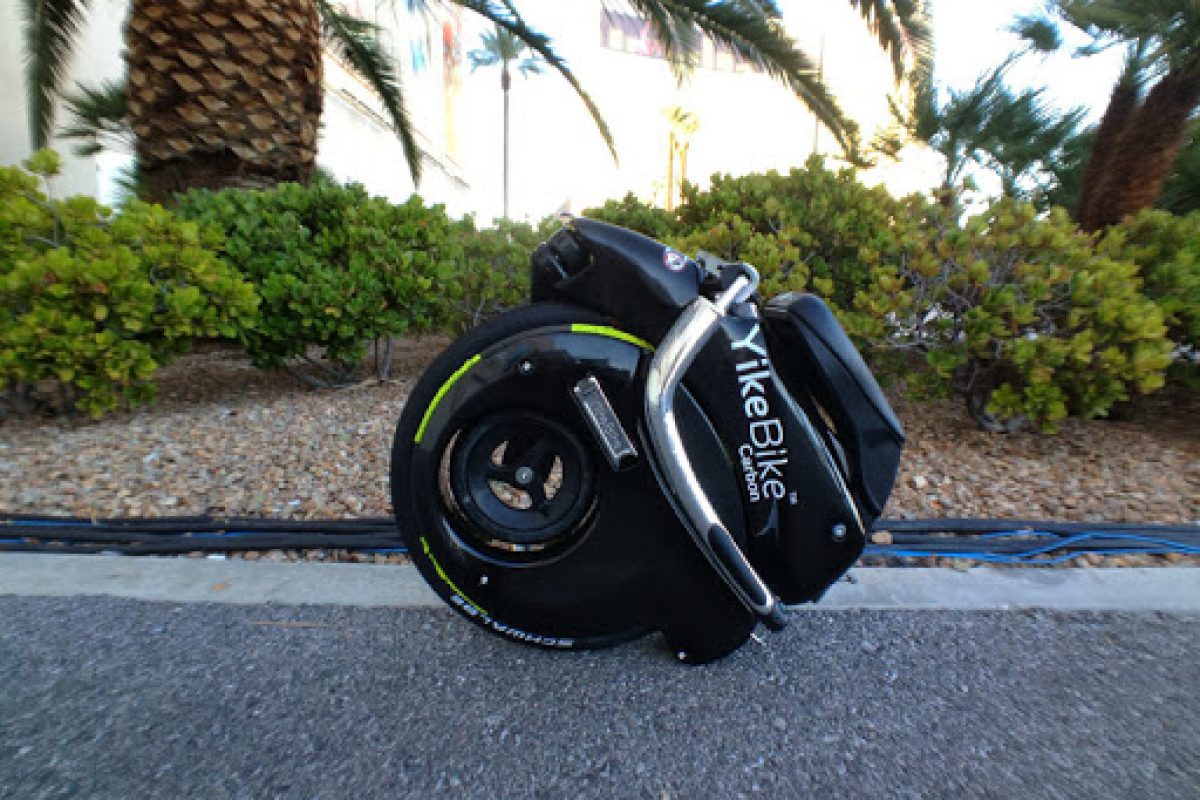 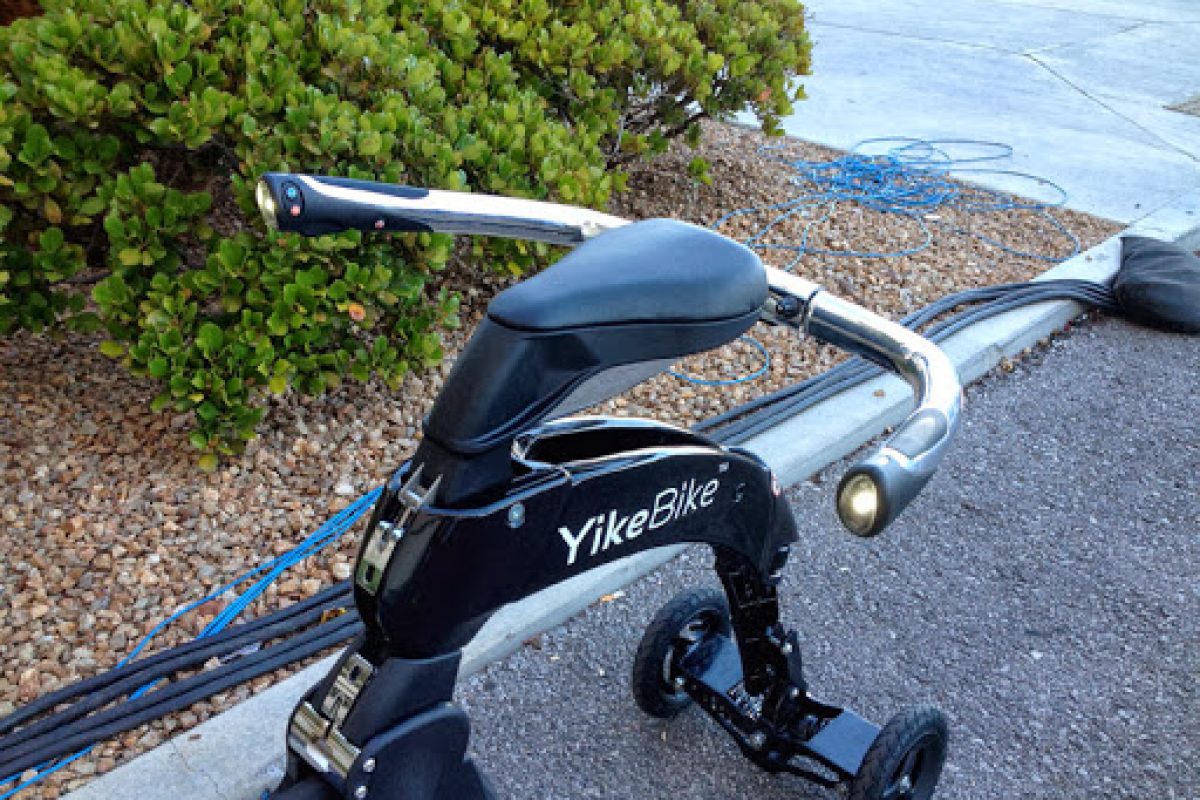 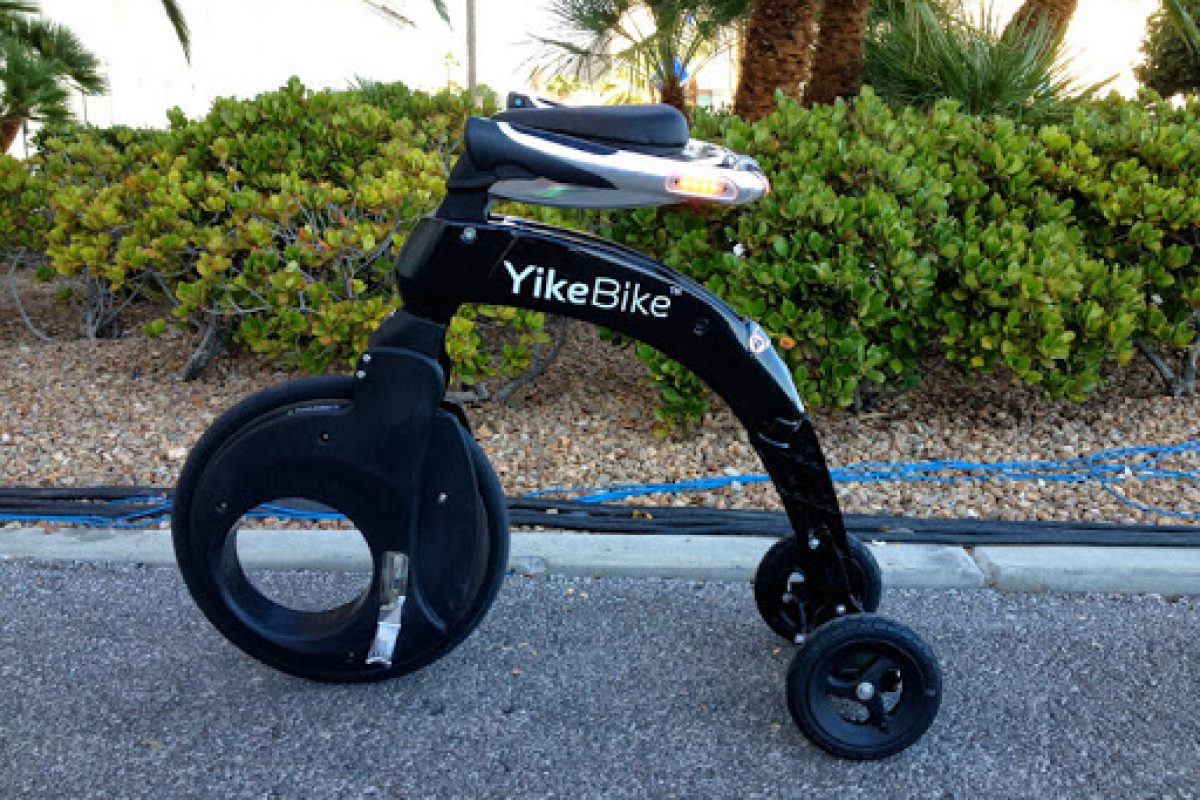 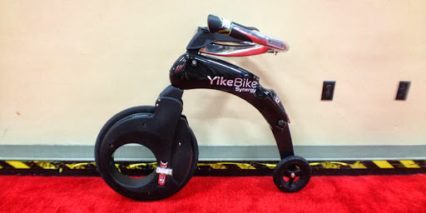 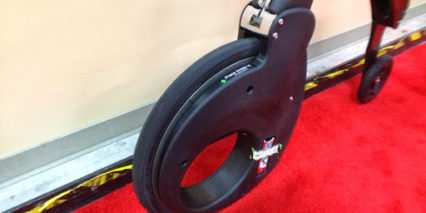 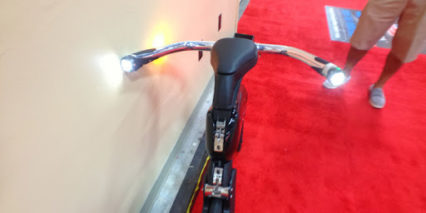 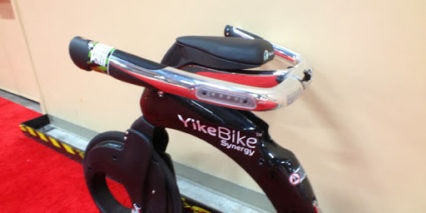 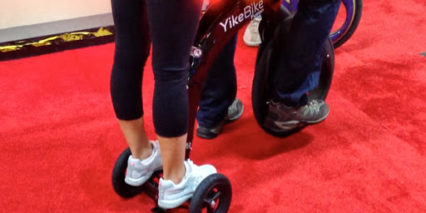 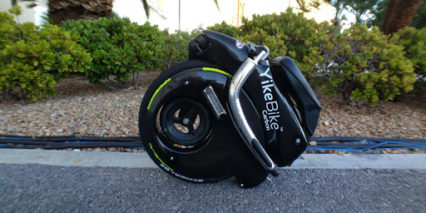 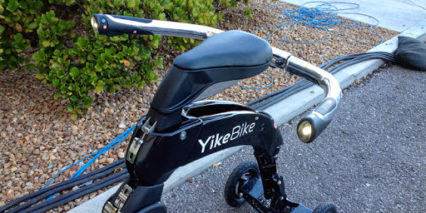 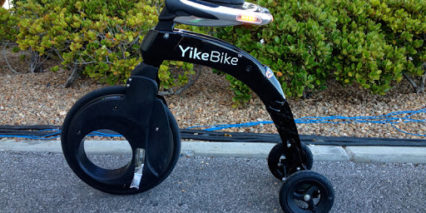 The YikeBike doesn’t fit into the traditional e-bicycle category because you cannot pedal it. It’s more of an electric transport vehicle akin to a Segway, only more bicycle-shaped. Composed of two wheels held in a frame with one behind the other, you steer with handlebars connected to the front wheel just like a bicycle only they come from behind you and stick out on the sides. It resembles the penny-farthing or “ordinary bicycle” of the mid 1800’s that had a very large front wheel and smaller stabilizer in the rear. And just like these old fashioned bikes, the YikeBike can be a bit unstable at first. These old fashioned “bigwheel” bicycles could operate without a chain, leveraging cranks connected directly to the oversized front wheel. In much the same way, the YikeBike motor, is built right in to the front wheel system powers the vehicle and offering regenerative braking.

Riding the YikeBike is thrilling and a bit unstable at first. Thankfully, it doesn’t position the rider very far off the ground and the top speed is about 15 miles per hour, greatly reducing the potential for injury in a fall. At any time during a ride you’re able to put your feet down on either side for stability. It operates much like the strider bicycles that have become popular for teaching kids how to ride. Once you’re moving forward, the bike becomes more stable and feet can be rested on two silver pegs extruding from the front wheel base. The real trick to riding this bike is gently squeezing your legs together on either side of the front wheel for stability. The handlebars are mostly for steering and if over-relied upon, they make it feel less stable.

In my opinion, the YikeBike is all about enabling commuters. It makes getting to or from the subway, train or bus station more manageable. No more slow walks, no more sweating and best of all, no more oversized systems that are too heavy to lift. I’m talking to you Mr. Segway! The Synergy is the middle-weight YikeBike in the series and it only weighs 27 pounds! It folds down to the size of a large briefcase and can be lifted with one hand. It also looks relatively cool and won’t seem out of place leaning against a desk in an office. Taking just five seconds to completely fold or unfold, it truly is convenient.

Driving the YikeBike is a 450 watt motor built right into the front wheel. You can’t see it but you do hear it whirring as you squeeze the hand throttle on the right handlebar. 450 watts is quite a lot for such a small, lightweight system. The battery driving it offers 37 volts of power and 6.6 amp hours of range. Overall, this is quite good and the bike feels very capable riding around on the flats. Even though the range and ride time is a bit more limited than full sized ebikes, the charge time is significantly less at just 1.5 or 4 hours depending on if you use the quick charger. If you left one charger at the office, you’d have no problem topping the YikeBike off before riding home.

The primary downsides to this system are the learning curve to figure out how to ride and lack of shock absorbers or suspension. Given the lower top speeds and primary use of sidewalks or bike lanes however, it rides well enough isn’t that uncomfortable. The tires offer a bit of give along with the seat and I found that pushing myself up using the foot rests reduced the shock of larger bumps. Overall, it’s a quirky but functional machine that does its job well. One of the big up-selling points from the lower end Fusion to the Synergy or Carbon is the locking mechanism for the rear wheel. These higher end YikeBikes also feature carbon accents and a slightly cooler frame design.

A lot of thought has gone into this very custom electric vehicle from New Zealand. It’s got headlights, tail lights, turn signals, flashing hazard lights and even a small chirping horn. It’s definitely a head turner, something you’d expect to see in a science fiction movie. Considering the price of ~$3,000 this bike offers decent value and the reduced weight does make it easier to carry. I must say however, you could save $1,000 and get the lower-end Fusion which is basically the same but weighs a few more pounds.

I remember when the Segway came out, it got a lot of questions but eventually found a niche with security personnel and city tours. The YikeBike addresses the needs of a much larger audience on a more practical level. It cuts out that “extra mile” that stops so many people from commuting to work with more efficient, sustainable public transportation options. The Synergy is a wonderful electric “bike” but it won’t help you burn the same calories as a true pedaling ebike would. Also, keep in mind the max recommended height is 6.4 and weight limit is 220 pounds. 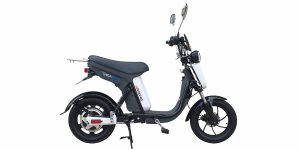 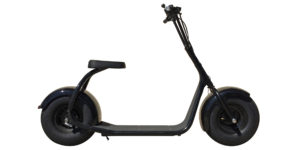 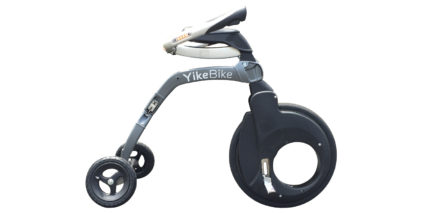 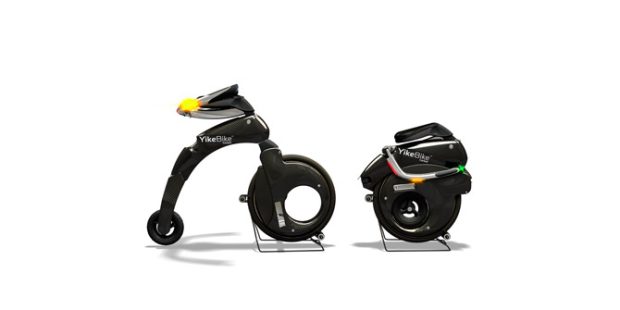 Ultra portable folding electric transport that rides like a bike without pedals, this is the utlra light weight version made with Carbon fiber. Folds to just 1.52 cubic feet, weighs less than 25 pounds and can be lifted…... 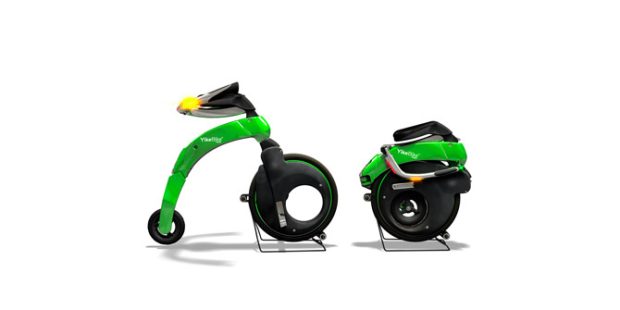 Thanks for the info on those training wheels set (US$600). If only the company released pricing on how much for the replacement battery then I may not think twice investing in one to two units. If you can update on the battery price, then that would be great.